My wife and our two daughters were jetting off to Paris for a few days so I decided to take the opportunity to head back down for another visit to Cornwall with my five year old son Luke and one of my brother-in-laws in tow. There was plenty of decorating to do but as usual I was hoping to be able to get in some birding in between painting sessions though with Luke accompanying me my birding options would be much more restricted: no sea watching for example and there would be a limit on how long he would wait patiently somewhere if I were waiting on a bird to show. As usual I'd been following the bird news in Cornwall and there had been some interesting stuff about: a couple of red-breasted flycatchers, several yellow-browed warblers and to top it all a scarlet tanager at St. Levan though apart from the original finders this had only been seen once for five minutes in the morning despite a good crowd looking out for it all day. However, a day or so before I was due to come down most of these birds seemed to have cleared out and it had all gone rather quiet.
I didn't leave Oxford until late morning after dropping off the Paris contingent at the bus station so it was late afternoon by the time we arrived in Cornwall. I decided to head straight over to Kenidjack which from the RBA texts seemed to be the only place with any birds about that day. We headed down to the end of the valley where a couple of yellow-browed warblers were supposed to be though in the windy conditions they were not very cooperative and I only got very fleeting views of one of them. As it was getting late and Luke was starting to complain I didn't stay too long but headed off to the cottage to get unpacked and to rustle up some food. 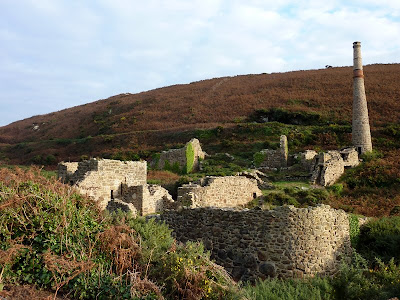 The Kenidjack mine ruins
The next morning I put in an initial painting session whilst Luke watched some DVD's. About mid-morning I felt like a break so I decided to head back to Kenidjack to see if I could get better views of the yellow-broweds. This time we took a picnic which I was hoping would keep Luke occupied for a while before he would start to complain about being bored. There were quite a few birders around this morning though once again the yellow-browed warblers offered only rather fleeting views and occasional calls. There were also a couple of firecrests in the garden of the last house which gave the occasional glimpses. One of the highlights was a lesser redpoll (a Cornish tick) which flew over us a number of times calling loudly. To round things off a couple of chough were flying around and calling as Luke and I headed back up the valley for home. 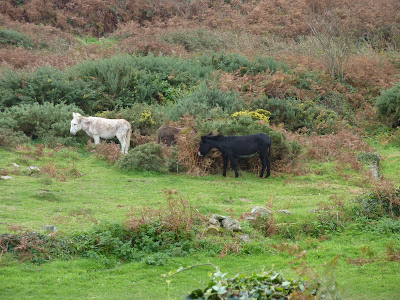 You may have noticed the distinct lack of bird photos on this posting:
this is due to their elusiveness. Instead here are some of the Kenidjack
donkeys which were much more cooperative.
Back at the cottage whilst I was hard at work painting I spotted an interesting warbler in the garden briefly: it had uniform greenish upper parts but a pale silvery underparts with faint darker smudges on the breast. It's supercilium was moderately strong, it's didn't seem to have a particularly long primary projection and I thought I caught a glimpse of a wing bar. Had I been certain of the wing bar I would have claimed it as a greenish warbler but from what I saw I can only have it down as a possible.
My brother-in-law arrived early afternoon. I'd made an agreement with Luke that each day we'd do something that he wanted to do so we walked up to the Pendeen playground and spent some time there messing about on the zip wire.
Posted by Adam Hartley (Gnome) at 13:56