I woke up early this morning and got painting straight away before the others were up and about. Once everyone was awake we had a stroll down to the lighthouse again where today I found a fine male black redstart on the lighthouse buildings. 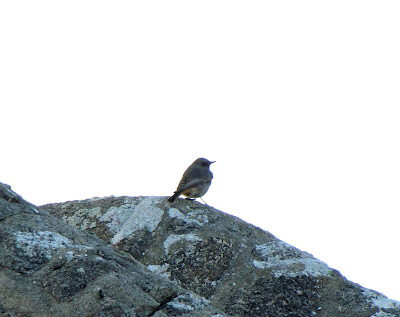 A record shot of the black redstart - a tricky shot of a dark
bird taken against a very bright background
My brother-in-law set off for home shortly after that and as I'd already done my morning painting session I decided to head over to Porthgwarra to look for the Pallas's warbler that had been showing in the sallows just north of the car park. Luke wanted to stay in the car for a while and I went to stake out the sallows where I found John Swann, Dave Parker and a few others staring at the impenetrable vegetation. The bird had apparently only been showing briefly and very infrequently so it looked like it might be a long wait. After a while with no sign so far Luke got bored so we went off to the shop to get a cup of tea and a flapjack for myself and an ice cream for Luke which we ate back at the sallows. Luke kept himself amused for a while by playing with my old point and shoot camera and he seems to be developing an interest in photography. We did hear the warbler call a few times though it obstinately didn't show and eventually Luke had had enough and we had to leave. I was told that the bird did finally show itself but not for another hour and a half so that would have been a long wait indeed.

After my afternoon painting session we nipped into Penzance for some shopping and for Luke to visit the playground at Marazion. Whilst there I checked out the mouth of the Red River for interesting pipits or wagtails but the best I could come up with was an adult Med. gull. 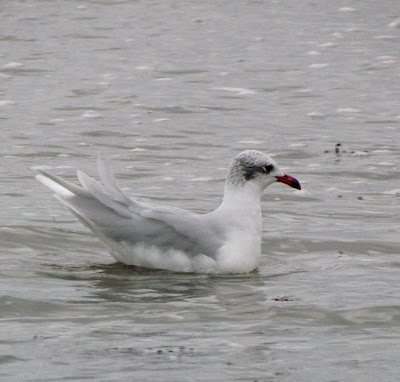 Med. gulls are always lovely to find
Posted by Adam Hartley (Gnome) at 15:52