This morning the weather was much more typical for October with wind, grey skies and patches of fog. As today was my last full day here before heading off home I wanted to finish off one more window before going out for some birding. I had to be back by mid afternoon as my brother-in-law was coming down today: some friends of his and he were going to be using the cottage from tomorrow for a few days so he was coming down a day early to get things ready for them and for me to show him the cottage ropes.


As a snow bunting had been reported at Pendeen yesterday just past the lower car park I was planning on nipping out to check it out once it had got properly light. However whilst I was still thinking about this a text came through on RBA reporting it as present this morning along the track to Manor Farm. I finished off half the window and then popped out where sure enough there it was. It was more flighty than they often are and wouldn't let me get too close before flying off over the wall though it soon came back again. Just at that point I met up with a visiting birder who was staying at Calartha Farm. It turned out that he'd found the bird this morning (and yesterday) and was back for a second look.


I returned home, finished off my window and contemplated my birding for the morning. I was waiting on news about a Glossy Ibis that had been seen at Stithians yesterday morning but so far I'd not heard anything. I therefore decided to nip down to PG to have another look for the elusive RT Pipit. This time I decided to walk in from Arden Sawah farm for a change which gets you onto the west side of the Moor a lot quicker and gives you some farmland fields to search through to boot. On the moor I met Dave Parker and Mark Wallace who'd just found two more Crimson Speckled moths. Honestly! These are clearly Trash Moths rather than Megas: I'd now seen four of them in the space of a few weeks! Mark was exploring some of the more obscure corners of the moor and we tagged along until I got a text saying that the Ibis was showing at Stithians so I decided to head off for it. On the way I pulled over at the Polgigga cricket pitch where there were loads of wagtails (it's well know for them). In amongst the pieds/whites I managed to find a single Yellow - not such a common bird for Cornwall.


I arrived at Stithians at just about the same time as a local birder whom I met a few days earlier at the Dotterel field so we looked around together. Far from it being a simple matter of tick & run there was no sign of it. We even had a good snoop around south of the causeway in the Southern Cutoff area but there was nothing more than a single Grey Heron. After a while we admitted defeat though my companion decided to check out the Northern Causeway on his way home and took my number in case he should find it. He had no luck and I headed back to Pendeen, stopping off at White Gate Cottage just to check that the Snow Bunting was OK (it was). I was just back in the house making a cup of tea when (you guessed it) Dave Parker rang. Apparently the Ibis was showing at the Norther Cutoff right now. Drat and Double Drat! I didn't have time (or the energy quite frankly) to head straight back out again as I had to get the cottage ship-shape. I would have to try on the way home for it tomorrow though it clearly was being elusive. I spent the rest of the time getting the cottage ready and packing for tomorrow's departure. It had been a rather frustrating day with only a nice Snow Bunting and a Yellow Wagtail to show for my efforts. Still that's birding - if it was easy all the time we'd soon get bored with it. 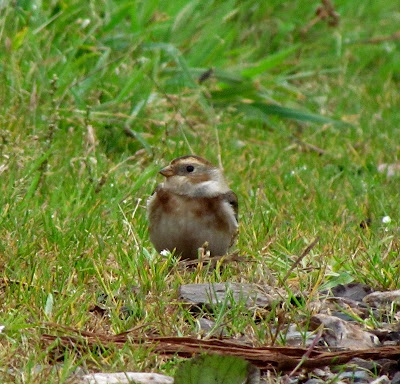 The bunting this afternoon when the light was at least a little better
Posted by Adam Hartley (Gnome) at 17:41