Today was once more sunny and warm which was great for being out and about but good birds seem to be a bit thin on the ground in Penwith. Whilst I've been getting Cornish ticks to keep me amused, the truth is there hasn't been anything really good about for a while. Sure there are a couple of Pec. Sands, some Wrynecks and a Black Kite or two but I seem already to be acquiring a rather blaisé attitude to stuff that would get me really excited back in Oxford. There was nothing in particular that I wanted to see from yesterday (I've given up on the Nanquidno Hawfinch) so in the morning I thought that I would just have a wander around locally to see what I could find and so that I could crack on with the painting. In general, if there's nothing particular to go after I want to be able to bank some extra painting time to compensate for times when I have to drop everything for something good.
During my Pendeen wander I kept hearing a distant down-slurred call which had me thinking of Red-throated Pipit. I could never see the bird but I was hearing so many that either there was a mass invasion of RT pipits or it was something else. Eventually I heard one well enough to realise that they were actually of course Siskins flying over though you wouldn't tend to associate that species with the open farmland of Pendeen. On my local wander I found a Clouded Yellow, at least half a dozen Small Coppers and a rather worn male Common Blue. There were still loads of Wheatears about and several Whinchat as well. 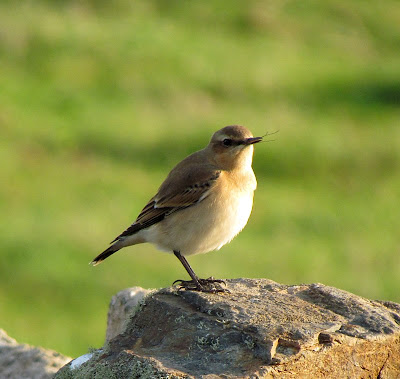 There were loads of wheatears about near the cottage
this morning. They are such lovely photogenic birds. This
one has a couple of crane fly legs sticking out of its mouth still 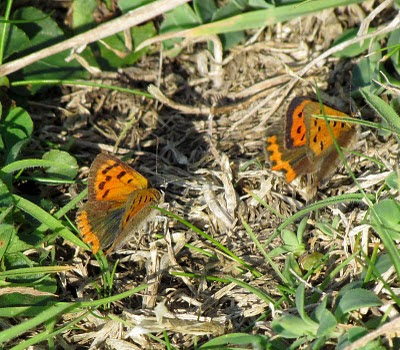 A couple of Small Coppers thinking about getting frisky
The combination of the heat and the fact that I hadn't slept too well meant that a post-lunch Power Nap was called for and I felt much better for it. I'd just started my afternoon painting session when I got a text from Dave Parker: the two Dotterel were back in their field between Higher Bosistow and Raftra and the Tawny Pipit had been reported as well. I hurriedly finished the window that I was on and then set off towards Polgigga once more. There I met up with Dave and another birder (whose name I've unfortunately forgotten) who were watching the two Dotterel in the field. There was also a Golden Plover and a Whinchat but no sign of the pipit which apparently was seen by friends of the couple who'd found the Dotterel but by no one else. Dave and I decided to have a trawl around the surrounding fields to see if we could turn it up but despite a thorough search of all the bare fields we couldnt find it. 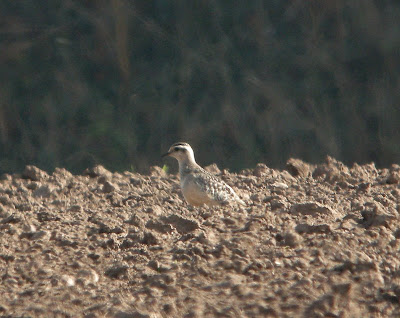 Digiscoping conditions were far from ideal and I
only took three shots of the Dotterel. Fortunately this one came out ok.

I drove home, stopping in at the Sennen Cove car park where the Snow Bunting had been reported again but I couldn't see it on a quick drive around the car park and also at Nanquidno where a brief wander down the valley revealed nothing at all though it was getting late by now. So it was back home for dinner and more painting. 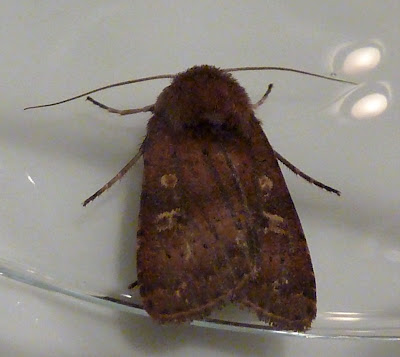