After yesterday's meagre returns I decided to adopt some different tactics today. In view of the continuing strong north-easterly winds I didn't bother with Pendeen this morning but instead decided to head off to the south coast which would hopefully be more sheltered. I therefore started at St Levan at the turning circle where I found someone staring intently at the trees. He'd found a Yellow-browed there yesterday evening though had seen little that morning apart from a few Redwings over. I joined him in his vigil but the area wasn't as sheltered as I'd hoped and the birding was difficult. After a while with nothing of note apart from some more Redwings over I decided to have a bit of an explore as this wasn't an area that I knew very well (apart from the Bonelli's site a few fields away which I felt I knew far too well!). I therefore took the footpath from the church over to Roskestal Farm though I had nothing to show for my efforts apart from a Fieldfare, a Dunnock and a few loafing gulls. On the way back I met Mark Wallace and we got to chatting. It turned out that he'd seen the American Goldie fly in off the sea at Porthgwarra about fifteen minutes before Ian and I picked it up at the Bonelli's site a few days ago. He'd not been absolutely certain of the ID so was interested to hear what we'd seen and heard. He'd seen very little this morning apart from a Yellow-browed at 60 Foot Cover - it was clearly going to be another tough day. After a while we went our separate ways, he to explore the fields whilst I headed back to the car.


Next stop was Nanquidno, which fortunately was at least fairly sheltered from the wind and here I did manage to see a few birds though they were few and far between. I even walked all the way over to Little Hendra and back though the only sightings of note were: one Blackcap, four fly-over Siskins, a fly-over heard-only Golden Plover and a Firecrest that someone else found and saw and that I only heard though it's slower, more deliberate call was noticeably different from the nearby Goldcrests. I did also get a very brief view of an interesting bird of prey that could have been a Hen Harrier though I didn't see it for long enough to be anywhere near certain. Interestingly, I later found out that someone else had seen a Hen Harrier in Kenidjack earlier that morning. 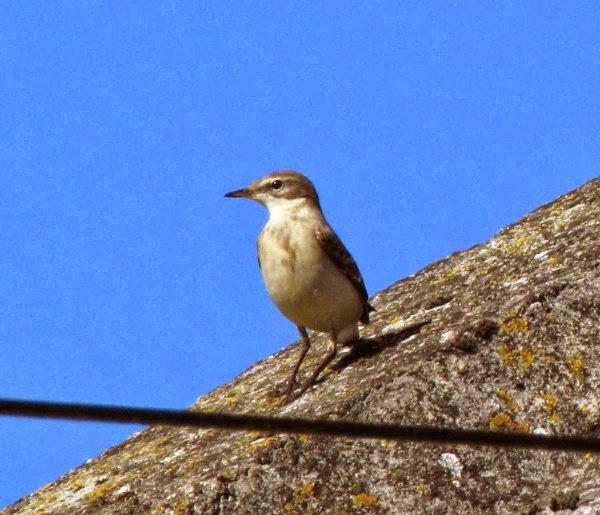 
By now it was lunchtime so I headed back to Pendeen, stopping at St Just to pick up a sandwich for lunch. Very little else was being reported on the grapevine or RBA so I more or less gave the rest of the day up as a bad job. With the winds forecast to continue for tomorrow as well I decided to spend the afternoon finishing off all the DIY tasks that I had and then to get ready to leave tomorrow morning rather than on Sunday as I'd originally planned. I thought that instead of slogging around some windswept and deserted valleys tomorrow here in Cornwall I could instead stop off somewhere on the way home where perhaps there might be more to see. Whilst doing my exterior painting work I got chatting to a decorator who was working on a neighbouring cottage. It turned out that he'd actually seen the Daurian Shrike down here a couple of days before it was officially discovered. He'd seen it perched by the roadside whilst working down at Pendeen and knew enough about birds to realise that it was something very much out of the ordinary (he even described it pretty well). When suddenly a whole bunch of birders started appearing down there he realised what he'd seen. Interesting!

I duly finished off my painting work, had a brief nap and then went into PZ to get some food for this evening's dinner and to fill the car up for tomorrow's journey home. After eating I packed up the cottage as much as I could so that I could get an early start the next morning.