As forecast the north westerly winds were swinging around to north easterly this morning, but unlike the forecast, they were stronger than predicted. This  prompted me to try my arm at a Pendeen sea watch despite the fact that the wind was too far east really. I arrived to find two groups already installed underneath the lighthouse but they'd not had much go by so far. The trouble with winds that are too northerly is that there is no shelter at Pendeen - it's full into you which isn't so nice. That would have been ok had there been something to watch but if truth be told it was a lacklustre session with very little of note. One of the two parties seemed to be spotting some stuff but as they were downwind of the rest of us and didn't seem at all inclined to share what they were seeing it didn't really help much. In the end with an ominous looking squall looming up on the horizon I gave it up as a bad job and beat a hasty retreat back to the cottage.


After some coffee and toast and with the weather brightening again I decided to do the Pendeen rounds but there isn't much shelter with the winds in this direction and the whole area was virtually birdless with one Wheatear, two Swallows (the first I've seen down here this week) and two Ravens the only noteworthy sightings - even the Snow Bunting had departed. With very little coming through on RBA I decided to crack on with some DIY on the exterior of the house, fortunately on the sheltered side from the wind so that it the sunshine it was actually very warm and pleasant. I had lunch outside in a sheltered spot and enjoyed the sunshine some more - it really was a bit of a sun trap out of the wind.


In terms of my afternoon birding outing I had hoped that something would come up on RBA or from other birders that would dictate what to do but in the absence of anything tempting I decided to head down to the south coast where I hoped it would be more sheltered. Just to do something a bit different I chose to go to Porthcurno - not somewhere that I've birded before. En route I popped into Pendeen churchard where I met up with regular Cornish visiting birder Dave (I can't remember his surname) and his wife though even the combined efforts of the three of us couldn't turn up anything at all. I did notice lots of Red Admirals about there, and in fact everywhere today, presumably pushed south by the winds. 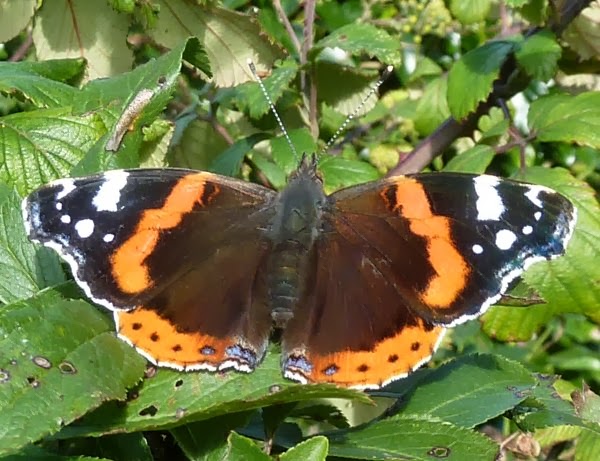 There was a bit of a mini Red Admiral invasion today


At Porthcurno I had a good wander around there but it was virtually birdless: a few tits, a wren and a robin were about my only sightings. I decided to head over to the café there only to discover that it was closed. I started to drive home, checking out the Polgigga sports pitch en route - three Buzzards, all looking rather ungainly on the ground, and a single Wheatear. The Apple Tree Café at Trevescan was also closed so I decided to have something at home instead. On the way I picked up a Belgian lady hitchhiker who was stranded at Sennen with no further buses to take her back home. It turned out that she was staying in Pendeen so she was very pleased to get all the way back so quickly. We talked about Cornwall and how much she loved the scenery here in Penwith, much better than further north at Tintagel where she'd visited previously. I could only agree with her on that point - it's easy to get rather blasé about it all but the scenery is indeeed stunning here.


Back home at the cottage I had a cup of tea, did a couple of small DIY tasks and then had a quick nap before dinner. I have found in the past that when the winds get up the birding can often be difficult here in Cornwall though quite a few Yellow-browed sightings came through on RBA later on so other people seemed at least to be seeing something. I may need a change of tactics tomorrow if the forecast for strengthening north-easterlies proves correct otherwise I can see myself getting rather fed up slogging around for little reward..
Posted by Adam Hartley (Gnome) at 20:18