Back at Pendeen watch first thing this morning where I met a husband a wife team of birders who were sea watching from the sheltered southerly side of the lighthouse so I decided to join them. Whilst this offered respite from the wind it did mean that the birds were further away and in future I think that I'll just have to brave the wind and sit in my usual spot. 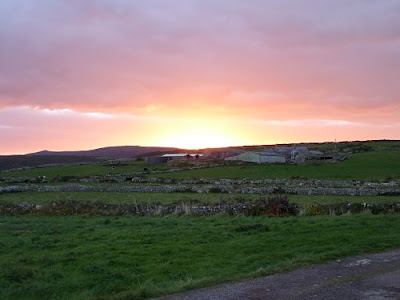 dawn coming up over the hill at Pendeen 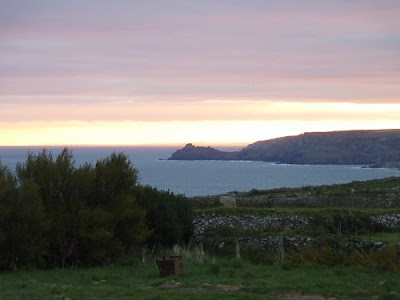 The Gurnard's Head at first light
Finally there was some activity on the sea with some shearwaters and skuas coming through. During the two hours that I was there as well as the usual stuff I counted ten balearic shearwaters, one sooty shearwater, about 6 arctic skuas including one really close in and one bonxie. I noticed that the rate of 5 balearics per hour was the same as was achieved at Porthgwarra that day. We also had three sightings of basking sharks though whether it was the same one or three different individuals is hard to say though at Land's End ten were reported.

I spent the next hour or so back at the cottage packing up and loading stuff in the car before setting off for home. I wanted to call in at Davidstow again on the way back as the buff-breasted sandpiper had been seen again the previous day and if I had time also at Turf in Devon to see the spotted sandpiper as it was just off the motorway junction though it wasn't that high a priority.

At Davidstow the weather was much nicer than last time with warm sun and a gentle breeze. It soon became apparently however that it was a much more popular place at the weekend with model aircraft enthusiasts, people riding mountain bikes and even proper light aircraft taking off and landing on one of the runways. There were one or two birding cars about and I too set of on my birding curb-crawl to see what I could find. The answer was not a great deal. I got excited when I saw a wader fly down to land by the pools but when I managed to find it again it turned out to be a dunlin. 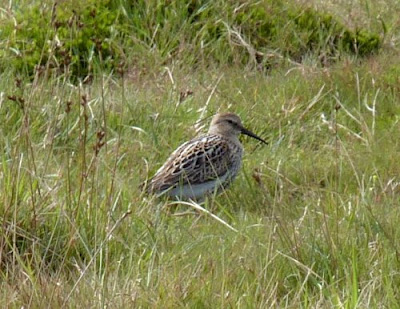 Not a buff-breasted sandpiper!
As it was a nice sunny day and there were no birds around I decided to have a little walk around by the control tower. Whilst doing so three birds zipped over. Two were linnets but the third gave a distinctive bunting trill and as it banked I caught sight in the bins of its chestnut wing panels and with distinctive markings on its face: a nice lapland bunting. There have been so many sightings of these down in Cornwall that it was only a matter of time before one flew over me. 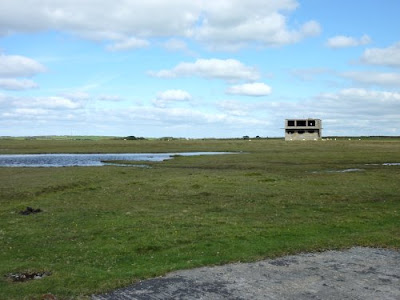 The control tower and small flood pool by the runway at Davidstow
With not much bird action at the airfield and a long journey ahead of me I decided that I should head off back to home and I arrived back in Oxford late afternoon, tired but pleased with my few days birding down in Cornwall.
Posted by Adam Hartley (Gnome) at 09:18