I woke up annoyingly early this morning: my mind was clearly geared up for an early start and some dawn till dusk birding but the truth was that with nothing else having been reported yesterday evening there weren't any immediate birding targets for me to tear after. Instead I opted for a walk around Pendeen to start with to see if I could turn up anything decent. There were quite a few mipits in the fields and at one stage a flock of about 50 went up together but I couldn't find any wheatears. Down by the Old Count House and the Lighthouse all was quiet and with an easterly breeze blowing the sea looked quiet too. There was a crest (presumably gold) and a chiffy in my garden and four Ravens flew over cronking loudly.


The next task du jour was to inspect the moth trap which I'd left out last night. Now, regular readers of this blog will have noticed my increasing interest in moths over the time that I've been posting to it and during the summer I took the plunge and started trapping in my garden back in Oxford. Therefore for my trip down here this week I decided to bring my homemade "Heath-Robinson" Actinic trap with me to see what I could catch. The truth was that in Oxford, my urban garden isn't that great for moths and so far in the few months that I've been running it, I have a garden list of only a little over 100 and that's including micros which I've had to resort to in order to maintain my interest. I was therefore keenly looking forward to seeing what I could catch down here in a much more rural setting.  The result was (apart from a huge number of crane flies) a healthy 50 or so moths of 13 species with Lunary Underwing, Feathered Ranunculus, Black Rustic and Square-spot Rustic making up the bulk of the numbers. 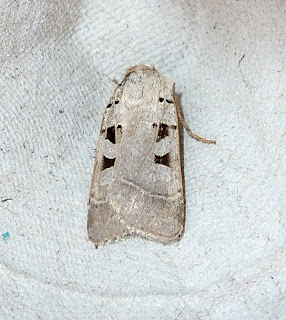 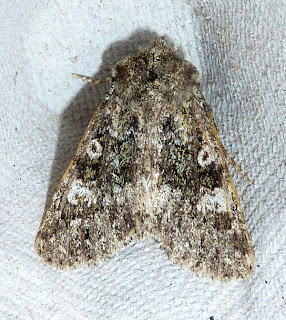 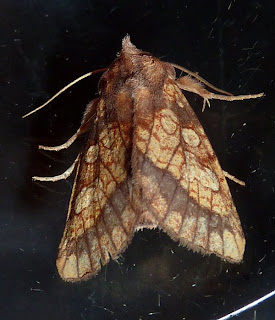 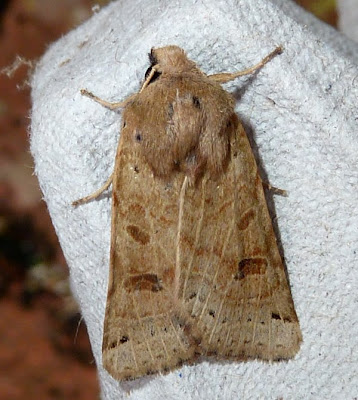 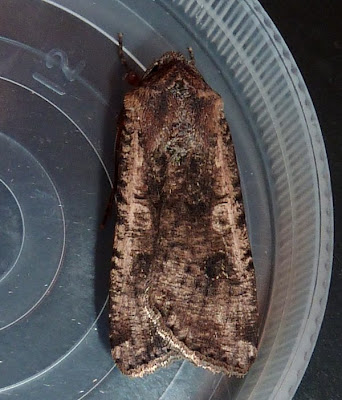 Pearly Underwing - this is a (reasonably common) migrant species


After this I had breakfast and then decided that I'd better head out somewhere to see what was about. I first stopped off at the Calartha Farm copse and at Pendeen church to see if anything was there but there was nothing of note. With nothing on RBA to tempt me I decided on my favourite valley, namely Nanquidno to see what was about. At the car park area I met up with Colin Moore who lives at the top of the valley- he'd already had a look around and not found anything noteworthy. Another regular visiting birder, Roger Carrington, had arrived at the same time and so the two of us went round together. Half way down Roger thought that he heard a Yellow-browed by the line of Sycamores though annoyingly it wouldn't call again. At this point John Chapple (see his blog here) and Kate (her blog here) turned up and we had a good natter. They'd found a couple of Firecrests and a Redstart further down by the last house. After a while we pressed on though despite careful looking we couldn't turn up anything special apart from a flock of half a dozen Siskins that were flying over occasionally. On the way back we met up with a few other birders who were just coming down. They'd stopped at the same line of Sycamores where they too had heard a Yellow-browed. Despite four or five of us all standing there staring at these tree it remained remarkably elusive giving only the briefest of views though it did at least call clearly once or twice. In the end it started to rain and I was getting cold, wet and hungry so I decided to call it a day and headed back to the car.


I had been intending to head back home for lunch but when I got to the top of the valley I pulled into the large layby next to the airfield in order to catch up with any texts etc that I might have missed whilst in the phone blackout of the valley. It was clear that there were a number of Yellow-brows, Redstarts and Pied Flies fresh in today and Colin Moore had even found a Wryneck round towards Gurland Farm. One intriguing RBA message was of three Glossy Ibises and a Hooded Crow "in a field near Brew East of Sennen". I wasn't so interested in the Ibises - they would be a Cornish year tick only for me. The Hoodie on the other hand would be a Cornish life tick so I thought that this was worth investigating further. I called up Dave Parker to see if he knew anything. He'd not heard anything other than the RBA message but guessed that the "field" might be the one on the track up to Brew pool. This sounded as good a place to start as anywhere so off I headed, stopping off in Sennen to buy some lunch. I arrived at the track to find half a dozen or so birders, including Alex Mackechnie. The three Ibises were about 75 yards away in a field though partially obscured behind some vegetation so were only on view for some of the time. Apparently the Hoodie had been in the fields behind us on the other side of the road. After about 10 minutes the three Ibises suddenly took off and flew low right over our heads behind us and over the road, looking very much like there were going to land in the field just the other side of the road. 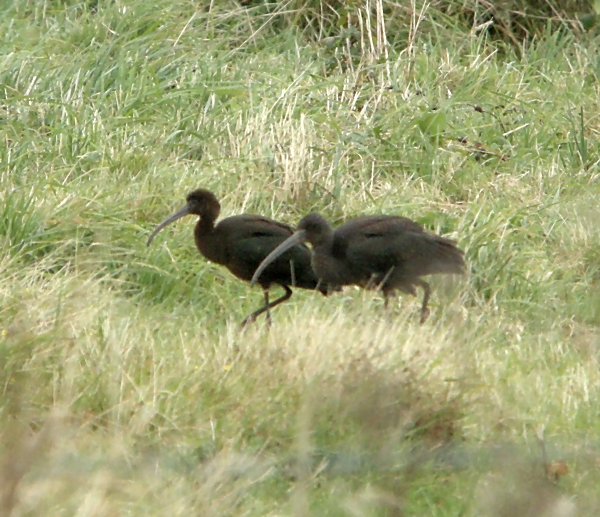 I managed precisely one digiscoped shot of the birds before they flew.
Fortunately it was of at least record shot quality

At this point John Swann turned up and so did Phil and Hilary (more regular visitors who are now actually moving down permanently in March next year). We all trooped off to see if we could find the birds from the other side of the road but after a while I was getting hungry and headed back to the car for my sandwich. Phil & Hilary then turned up to say that the Ibises had been seen again as well as the crow and they were heading off to see if they could get closer so I revved up the Gnome-mobile and tagged along. We all re-convened over by Trevear Farm where apparently the Ibises were on view from the track leading up to Trevorian Farm though they soon moved on. Alex, Phil & Hiliary and I were more interested in the Hooded Crow and eventually it was tracked down in the middle of a field just to the south west of Trevear Farm. What's more it looked from what we could tell to be the genuine article rather than a hybrid so a nice Cornish tick for me. I watched it long enough to take a few record shots in the pouring rain before heading back to the car. 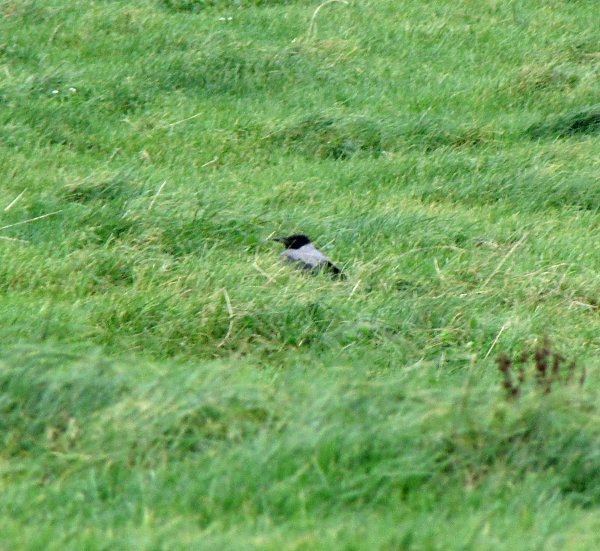 Strictly record shot only of the Hooded Crow

By now it was raining rather heavily and the wind was starting to get up so I decided to head home for a nice cup of tea & some cake. After that I did some work on identifying some of the more difficult moths from last night and then had a brief power nap. It had been a surprisingly productive day's birding with clearly some new stuff fresh in today. With these Easterlies due to continue for a few more days yet let's hope that some more good stuff is brought in.