Today yet again we hung around Pendeen. This was partly because we couldn't quite decide what to do and also we had to finish off our DIY tasks and do a bit of getting ready to depart first. I did manage to nip out first thing back to the Pendeen pond to have a closer look at the Hawker dragonfly. Having discussed it with John Swann, he informed me that Common Hawker was pretty rare around here and it was much more likely to be a Migrant or a Southern Hawker. After looking at it some more I've come to the conclusion that it's a Migrant. I say "it" but actually there were two of them this morning as well as an Emperor and a Common Darter, all fighting over the same small bit of pond.

Back home at the cottage in the end we decided on a walk over to the mine workings at Geevor. Here I managed to spot a single Wheatear and a couple of Stonechats but little else. . 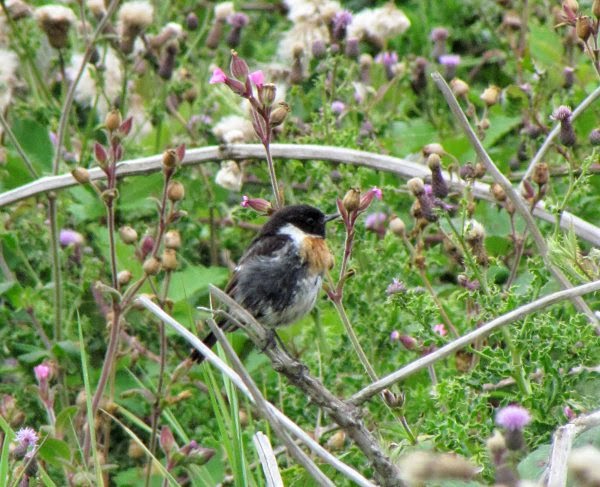 Then it was back along the main road into Pendeen with a stop off at Heather's for tea and cake which was most excellent. I remember that it used to be an old antique shop that never seemed to be open but now it's a great little café.

Back at the cottage I gave daughter K (who's now 18) her first driving lesson in the field behind the cottages. She never got out of first gear but it was a good safe location for her to get started on. Then it was time for a spot of packing.


I'd looked at the weather forecast and frustratingly I saw that some decent sea watching weather was forecast for the weekend just as we were leaving. The vanguard of this weather system was supposed to arrive on Friday afternoon and finally by about 7pm it did start to get a bit more windy so I decided on an evening sea watch at the lighthouse. I realised that this was the first time that I'd actually got my scope out all week. I couldn't believe it - a week in Cornwall in the August and this was my first sea watch on the evening before departing. It didn't start out too promising with barely anything passing but gradually some Manxies started to move through and then I managed to pick up on a distant large Shearwater, which to my eyes looked like a Cory's. Apart from that it was all rather quiet with 140 odd Manx Shearwaters, 1 Guillemot, 2 Kittiwakes, 6 Fulmars and the usual Gannets passing through. A calling Curlew flew past and a mixed flock of waders flew over my head, comprising of two Turnstones and what looked like 6 Sanderling though it was hard to ID them. Then it was back home to finish off the packing. I did try the moth light but it was far too windy for anything to appear and I soon gave up.