Finally I'm back down in my beloved Cornwall. It's been far too long but we're back down in the cottage for a family holiday for a week.As it's the first week of August I'm not expecting very much on the bird front. In fact I did some research on RBA, looking back over the last dozen years or so to see what one might expect and the answer is precious little apart from some large Shearwater sightings should the winds be in the right direction. So this is very much going to be a low key family holiday but there's always stuff to see and I'm just starting to get into plants as well so there will be plenty of new coastal species for me to mis-identify!


Going down to the west country on a Saturday during the school holidays is always a bit of a nightmare because of the traffic. We tried to mitigate this to some extent by leaving early which for the family turned out to be around 8:30 a.m. This was certainly the earliest that we've managed by some margin though I couldn't help but feel that it still wasn't going to be enough. Anyway, all our best efforts came to naught when we found that the A420 had been completely closed for road repairs just before Swindon and that we had to divert miles back the way we came to get around it. We couldn't believe that they'd not put a sign back at Farringdon in the first place rather than making us travle a good 15 minutes onwards only to send us back. Some stressful exchanges were had between myself and my VLW who was navigating as we tried to work out where to go but eventually we were back on track though at least half an hour further behind our schedule. The M5 wasn't as bad as it could have been though there was a certain amount of stopping and starting and we made steady progress southwards until we came to Exeter. Here there were signs flashing up about various jams up ahead on the A30 so we made the decision to take the less popular A38 instead and to stop off at Golitha Falls to have our picnic lunch. Fortunately there were no traffic problems at all on this route and we arrived at around 1:30 pm at the beautiful Golitha Falls. 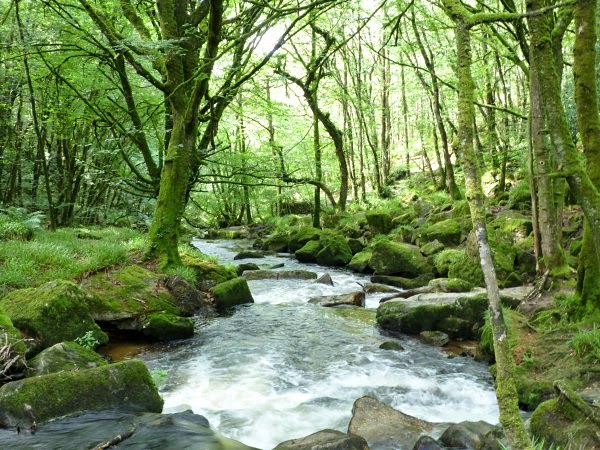 Here we had our picnic lunch and wandered around a bit. B, our younger daughter, insisted on walking on some fallen tree trunks all the way across the river. Whilst my VLW was somewhat stressed by this, I couldn't help but be impressed - stereotypical responses no doubt! On the bird front there was little to note apart from a calling Nuthatch, a Grey Wagtail and a party of Coal Tits but there were lots of Banded Demoiselles about, looking stunning in the bright sunshine. There was also a lovely Golden-ringed Dragonfly patrolling one of the side ditches though it never settled for a photo. Whilst I was off trying to photograph them, apparently lots of Demoiselles and even the Golden-ringed came to settle on L (our eldest daughter)'s jeans which were very faded and looked very bright in the sunlight. I had severe Odonata envy when I later found out!

After a couple of hours we decided to head on down south and mercifully by now the traffic had cleared. A quick stop off for tea and cakes near Hayle and then at Sainsbury's for some shopping where I managed to see four Whimbrel fly over the car park whilst I was waiting and then it was on up to the cottage. After getting unpacked we ambled down to the lighthouse to gaze at the sea and to appreciate just how great it is to be back down here.I busied myself with taking some snaps of the coastal plants that I didn't recognise in order to try and work out what they were later on.

I was keen to bring my moth trap down here but sadly in the end there just wasn't enough space in the car so I'm going to have to be content with putting on the exterior "moth light" to see what it might attract. Tonight it was a bit breezy and a single Drinker and a couple of Flame Shoulders were the only visitors.