We had a lazy low key day today. After a lie in we pootled around Pendeen for a bit. I spotted a nice Peregrine sitting on the wires down by the Lighthouse though I was only able to get long distance shot of it before it flew off. I also noticed that the regular Pendeen Ravens had now gone up to five in number so I'm guessing that they've had a successful breeding season. I wandered around taking photos of the local flowers and butterflies and just enjoying the stunning scenery.


After a while we finally overcame the natural family inertial barrier that makes it so difficult to get a party of five people to agree to do anything and then once agreed, actually to get ready do it and we headed off to Penzance. Our first port of call was the fair at Trereife House. Here we passed a happy couple of hours wandering around looking at the various stands and listening to the music. I bought a nice leather belt that I'd been meaning to get for some time, my VLW bought a Tree Fern at the bargain price and I met up with Tony Mills who had a stand in the marquee selling some of his wonderful prints (see his web-site here). We had some venison burgers which we ate in the orchard and I saw a Clouded Yellow in the garden. L our eight year old son and I both had a go at archery which, although I've never done it before, I found strangely familar - perhaps I was an archer in a previous life or something! All in all a pleasant and chilled out time was had by all. 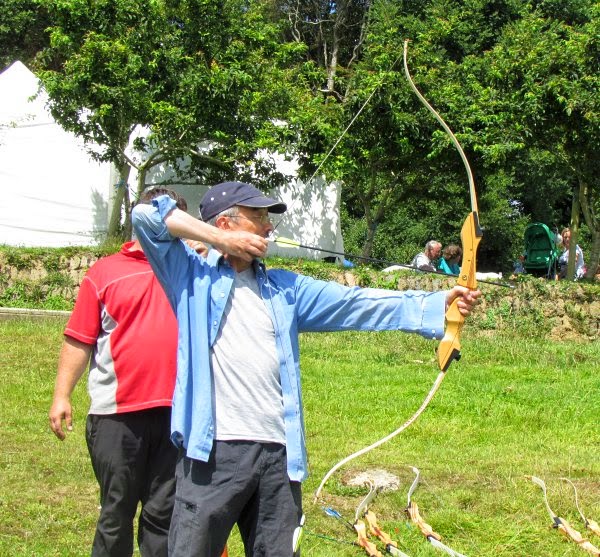 After that we collectively decided to head over to Marazion beach for a wander about. All the car parks in Marazion were completely full of visitors so in the end we drove back to Long Rock car park (free on a Sunday!) and walked all the way to Marazion along the beach, which turned out to be quite a long way. We enjoyed a well-earned tea and snack at the revamped Godolphin Arms before the long walk back to the car. L wanted to go in the playground for a while so I wandered off to phtograph some of the flowers in the sand dunes near the Red River mouth.

Given how many people there were around there was precious little to report on the bird front with just a few gulls (I couldn't even find any Med Gulls) and a couple of Oystercatchers seen. I'm guessing the waders must have been down at Chyandour as I didn't see any apart from the Oycs.

Then it was back home for dinner and to chill out. The moth light only attracted two moths: a Flame Shoulder a grass moth and this rather groovy cricket.

That evening the news broke of a white morph Gyr that had been seen yesterday near Cot though the consensus is that it's an escapee at this time of year.